Before becoming a writer Deighton was a successful book illustrator.

He had a distinctive design style, with notable black outlines to his images and a slight impressionistic feel.

This page contains examples of the book cover designs he produced for publishing firms like Andre Deutsch and Penguin, including his famous cover for Jack Kerouac's On the Road.

You'll find pretty much ever cover he designed on this website.

Working as a freelance artist in the 1950s and early 1960s Len Deighton often did illustration work for magazines, in the days before Photoshop.

He also worked for a time as an art director for advertising companies in London and New York.

Here you'll find some examples of such work, for magazines such as Good Housekeeping and Vogue.

Examples of Deighton's other artwork

Gathered on this page are selected examples of other commercial illustration work done by Len Deighton, including his first ever published writing, a piece in Ark magazine.

These two friends and art-school contemporaries have worked with Len Deighton at various stages of his career.

They have both been responsible for significant design trends in the development and marketing of Deighton's books, for example with The Ipcress File's innovative cover and the 80th birthday reissues of every Deighton book.

While best know for his written words, before he became a writer Len Deighton's was an accomplished graphic designers and stylist.

As Deighton himself has commented, his work as an artist shaped his work as author. He wrote as he would design, with a particular emphasis on description for example.

Len Deighton was at the centre of a time of revolution in art and design, as student and then as a writer. His pal Raymond Hawkey was a student with Deighton at the Royal College of Art and subsequently went on to design some of the most iconic book covers in publishing history, changing forever the scope of what a cover could do for a book, with his black and white photography and sparse, simple lettering.

In this section you'll find more information on the background to Ray Hawkey's designs for Deighton's books and their collaboration. Deighton, Hawkey and others were also to recognise the growing link between art and the commercial world such as in advertising.

The production of Ark magazine, the in-house journal for the Royal College of Art which subsequently became a commercial operation creating and designing a high end periodical on art, design and words, was something in which Len Deighton was involved and edited on a couple of occasions. Many of those who worked with Deighton on Ark and other projects went on themselves to become leading designers and artists.

Through his work designing book covers, his posters, his work inspiring other designers, his own distinctive drawing style and his acceptance of the commercial benefits of good design, Len Deighton can add design to writing and cookery as areas where he has had a significant influence on the development of these fields. Click on the images below to go to each section.

Take a look at examples of Deighton's own design work and the design of his books and films.

After graduating from art college, one of the areas of work Deighton specialised in - and was in demand for - was illustrating book covers, the most famous of which he designed was that for the UK first edition of Jack Kerouac's On the Road.

Check out the gallery below for examples of Deighton's book cover designs.

After graduating from art college, as an illustrator and designer Deighton worked freelance for many lifestyle and fashion magazines, such as Vogue and Good Housekeeping, providing illustrations and graphic designs to support their articles and features.

Click on the images below for examples of Deighton's design work with a number of magazines in the 1950s and 1960s.

As well as working for magazines, Len Deighton spent some time as a design director for a number of advertising firms, including some in New York, where he worked for a period. Commercial illustration for advertising, catalogues and other business-to-business communications was a lucrative form of revenue for in-demand designers

Click on the images below for examples of Deighton's design work for commercial and advertising partners in the 1950s and 1960s.

The gallery below includes examples of miscellaneous other illustrations done by Len Deighton during his career as a commercial artist, including designs done for his own pleasure as well as those for commercial benefit.

See a variety of other illustrations below.

There have been two designers - and friends - with whom Deighton has worked extensively and who have in turn had a major influence on the success of his books and films, Raymond Hawkey and Arnold Schwartzman, both of whom went on to become internationally renowned designers in their own rights.

Hawkey was a friend and fellow design student who most famously introduced the white cover for The Ipcress File. Arnold Schwartzman is another contemporary with whom Deighton developed the Airshipwreck book and who went on to produce the stunning upgraded covers to Deighton's novels reissued by Harper Collins in the 2010s. In addition, art-school contemporary Adrian Bailey worked on some later covers (though few of the designs found their way to books), and artist Gordon Crabb did a number of designs which features on many paperback editions of Deighton's works in the 'seventies.

The galleries below provide examples of where these great designers have complemented Deighton's work. 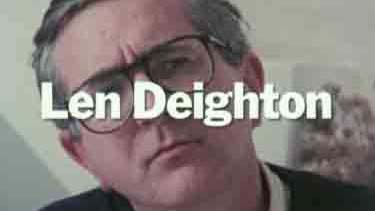 Raymond Hawkey was the design director for The Observer magazine, and he saw the potential in Deighton's cartoon notes for his cooking as a new way or presenting food and cooking tips to readers, giving Deighton advice on presenting them. Their success led directly to the Action Cookbook.

This type of infographic illustration was introduced by Hawkey when he was design director of The Daily Express newspaper. He was arguably responsible for introducing such illustrations into modern newspapers. 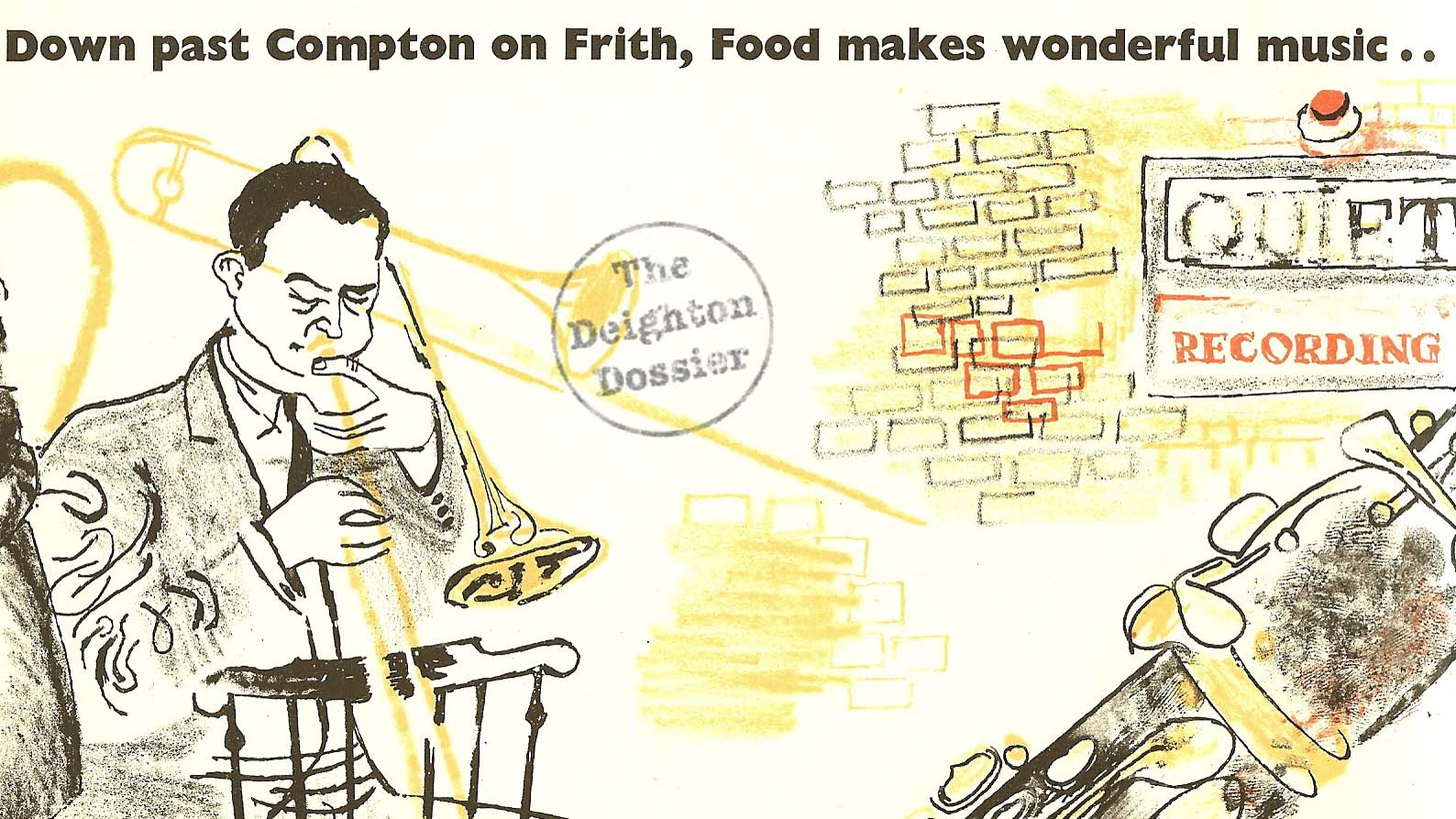 Hawkey worked with Deighton on his cover designs from The Ipcress File through to London Match. The cover for Spy Story is redolent of Hawkey's clean, unobtrusive design feel that communicates the story's narrative succinctly.

Designed by Hawkey using the clean white background and focus on objects in isolation - used successfully on the cover of The Ipcress File - this sequence marvellously sets the tone for Deighton's wartime film.

The designer at work

Schwartzman and Deighton have been friends and collaborated together for many decades, since being art and design school contemporaries.

Deighton and Schwartzman collaborated on Airshipwreck, Deighton's book on famous airship disasters. As well as designing the book, Schwartzman developed the laid-in ephemera postcards and sound recording that accompanied early editions and which are now sought after by collectors.

Schwartzman was commissioned by Harper Collins to produce brand new covers for all of the existing Deighton novels, creating a brand new feel for each with a unified design approach.

The cover for the second of the nine Bernard Samson novels - Mexico Set used the theme of masks, which Schwartzman used for the first three novels; he introduced the idea of a visual representation of the main character for the first time.

The designer at work

A long-time friend of Deighton and an art-school contemporary (he is one year older), painter and illustrator Adrian Bailey has worked in many areas of design and the arts. Born in St. Albans in 1928, he studied painting at St. Martins School of Art - see image, left - which is where he got to know Len Deighton. He then went on to work as a copyrighter, photographer, and art editor (as Deighton also did). They are still good friends.

Marketing for Hook, Line and Sinker

This image is one on which Deighton and Adrian Bailey collaborated in the 1980s, for the second trilogy in the Samson series of books. Friends and acquaintances were used by them both as models for some of the characters in this image.

So, Bret Rensselaer (middle, with book) is based on designer and mutual friend Ray Hawkey; Frank Harrington (top middle, with tie) is based on Adrian Bailey himself; and Lisl Hennig (bottom, with dark hair), is based on Jennifer Paterson, the food writer who was one of the 'Two Fat Ladies' on the BBC cooking show.

Gloria Kent (middle, in fir hat) and Fiona Samson (lower right, in the Hermes scarf) are two aspects of Ysabele, Deighton's second wife. This image of Fiona was used on the cover of Spy Sinker.

Biography
In his own words
According to others
Journalism
Did you know?
Interviews
Understanding Deighton's writing
Deighton at 90

Fiction
Non-Fiction
Food & Cooking
Everything Else